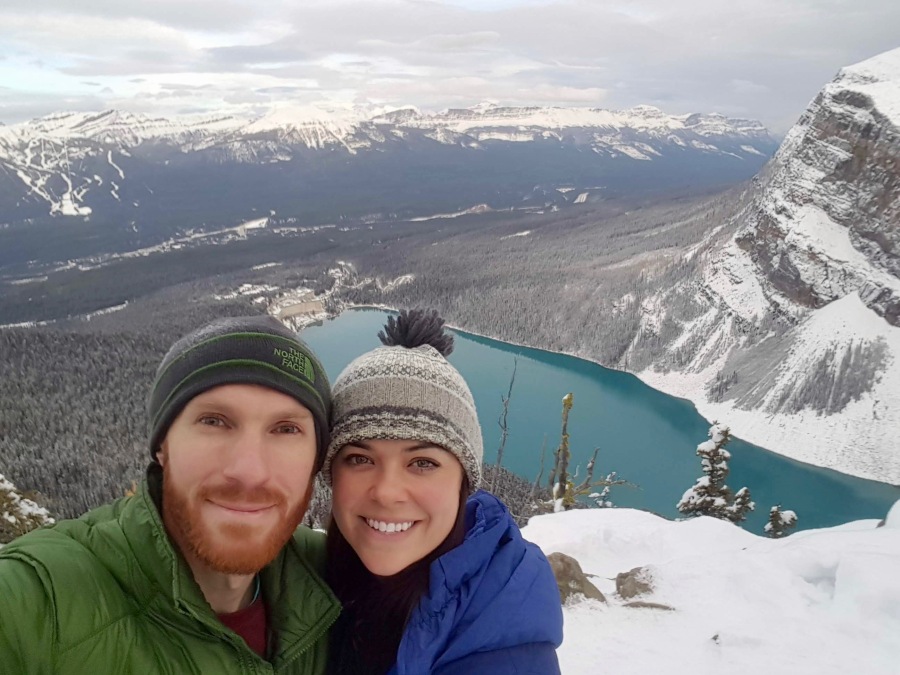 In early October, Phil and I made the 10.5 hour drive from Seattle up to Banff, Alberta. We left after work on Thursday night and drove 4 hours to a small town called Merritt. We stayed in a last minute Motel and then woke up to drive the next 6.5 hours.

From Seattle, we went straight north into Canada and then drove east. We chose the northern route since it was more scenic and a little faster, but more of a risk this time of year depending on the weather. Some parts you might need chains on your tires so beware, but luckily we did not.

Our drive was absolutely breathtaking. A lot of these pictures are through a car window so bare with me, but you get the idea. 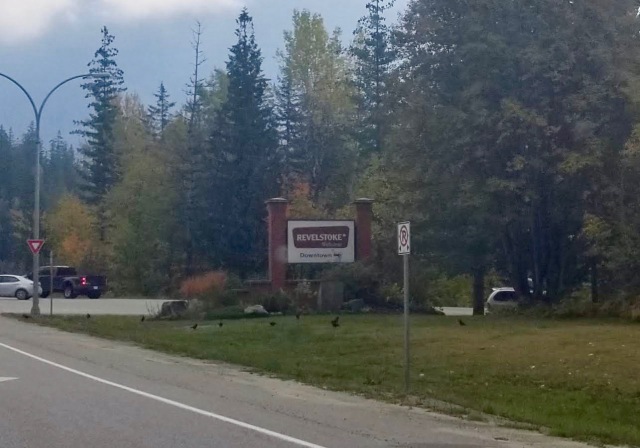 We passed many Canadian towns on the way to Banff. One is Revelstoke which is supposed to have some of the best skiing in the world. 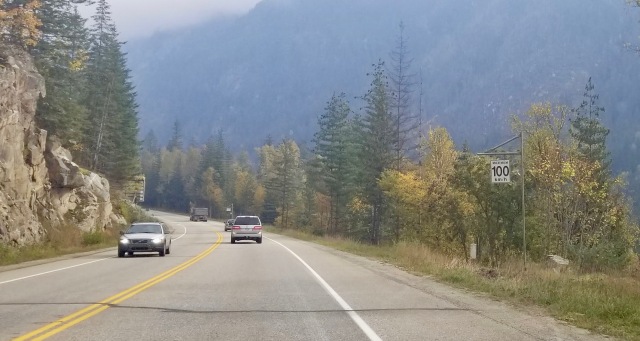 Speed limit signs like this one were very common and made us do a double take when we saw 100! 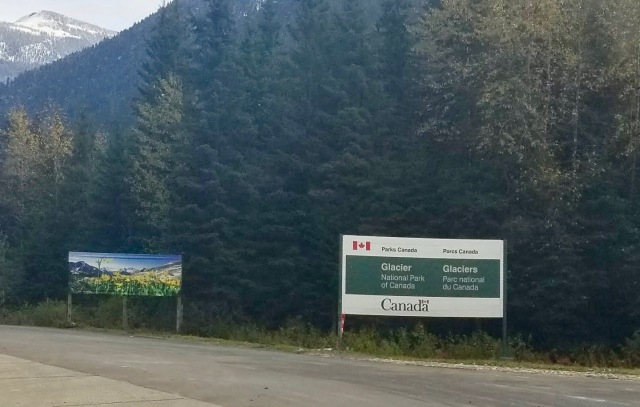 We were very lucky to still get some fall colors in early October.

We drove through many of these snow tunnels on our drive, strategically placed in avalanche prone areas.

If you guys didn’t know already, Phil is a good planner and had this trip planned out to a T. At some point on our drive, we decided to call the visitor center to ask about bear activity and hiking conditions. Well we called, and they said in the last 24 hours they had a massive snow storm and most of the high country was closed due to avalanche danger including the road to Moraine Lake. We were absolutely devastated. I was reading our lists of hikes to the park ranger and she basically said that all were closed, but enter at your own risk. Luckily, Lake Agnes was one on our list that was still open and we decided to go see Lake Louise and hike up to Lake Agnes since we wanted to do this one anyway. 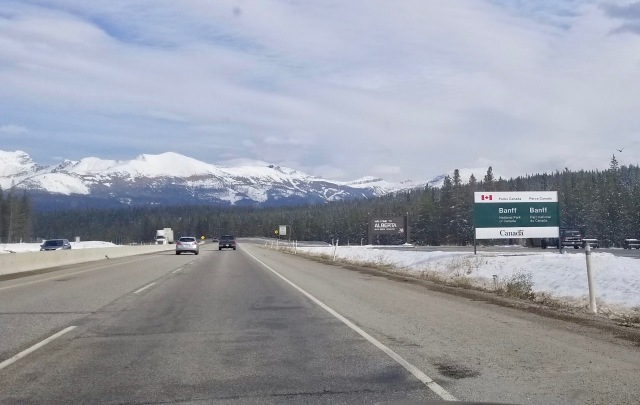 The entrance to Banff National Park! This is also where you cross from British Columbia into Alberta.

After 6.5 hours we finally made it to the small town of Lake Louise in Banff National Park. We planned on staying here two nights and then the town of Banff for our other two nights.

We thought about camping, but decided to stay in this hostel. We loved it! It had a very convenient and affordable restaurant downstairs in the hostel. Prior to coming to Banff, we kept checking the weather to decide if we wanted to camp or not. With night temperatures in the teens and occasional single digits, we decided to splurge and stay indoors. 🙂

We arrived in town at about 4 pm, quickly checked into the hostel, changed and headed out to explore before dark.

We started our hike at Lake Louise and then on to Lake Agnes and further up to the Big Beehive for a view of Lake Louise from up above.

The famous Lake Louise! We started walking around it to the right and split off on the path up to Lake Agnes. This trail was supposed to be about 6 miles round trip to Lake Agnes. We added the short hike up to Big Beehive at the top, making it about 7 miles total.

The microspikes were a must in October with the recent snowstorm! 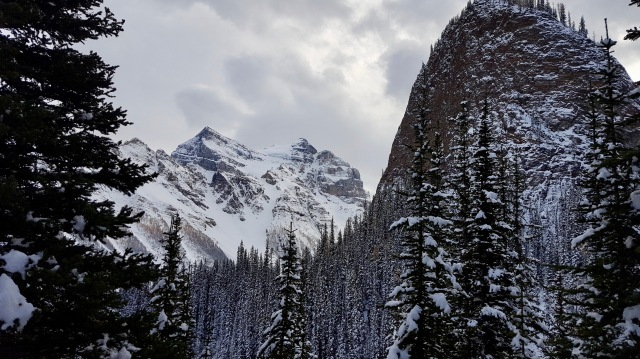 The staircase up to Lake Agnes and the Teahouse! 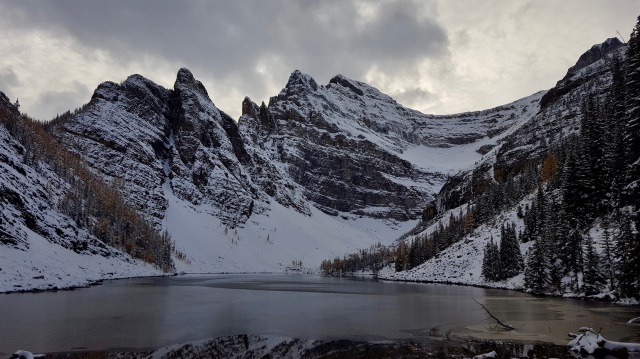 Look at that reflection. 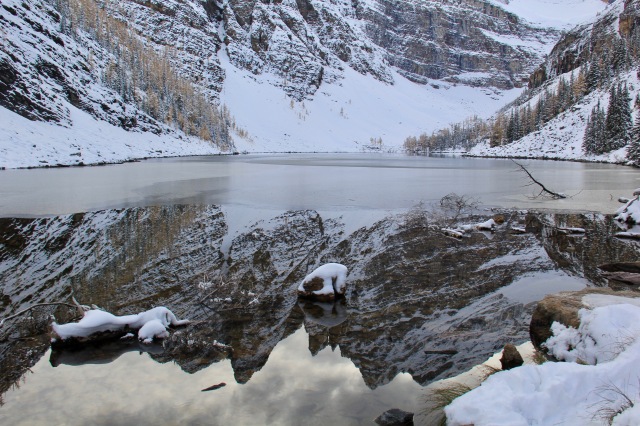 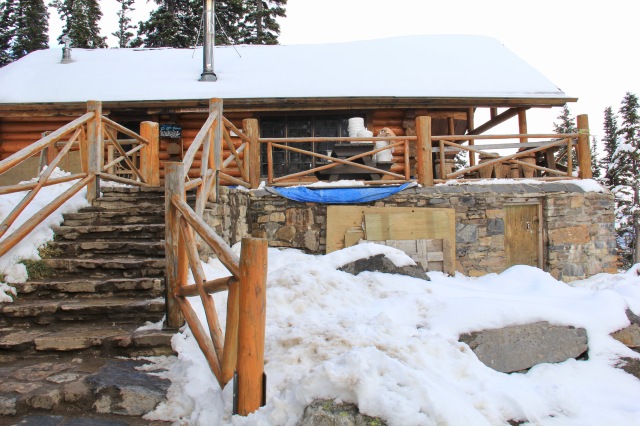 This is the Tea House at Lake Agnes. It was closed since it was after 4 pm, but I love the idea! The tea house is at 7,005 feet, if you’re ready for a hot cup of tea after you hike up to Lake Agnes! Very neat. 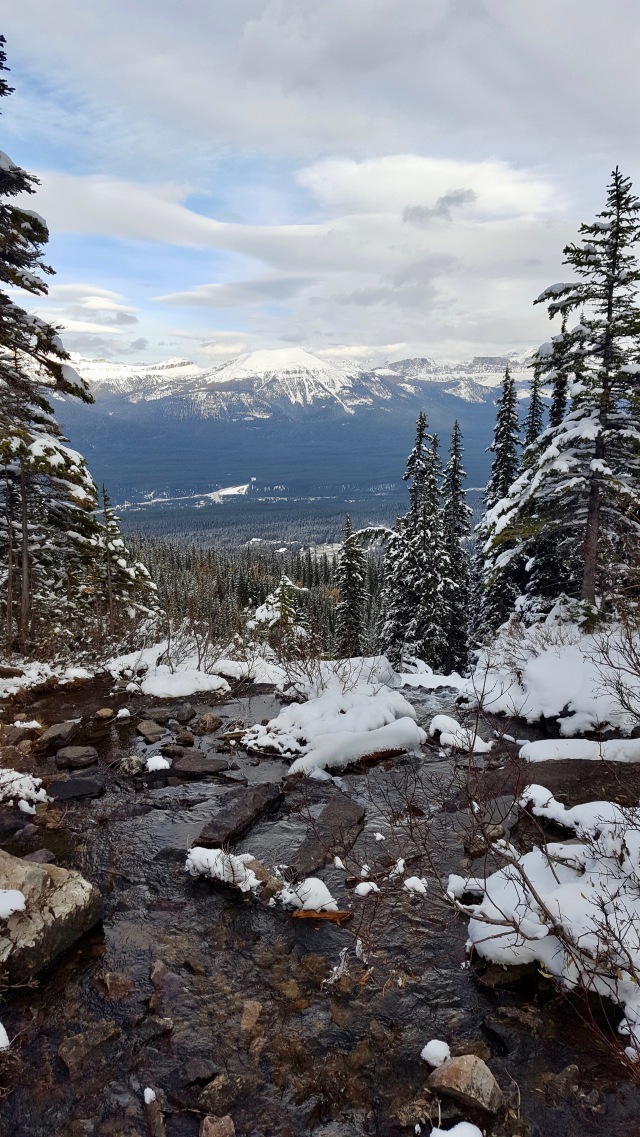 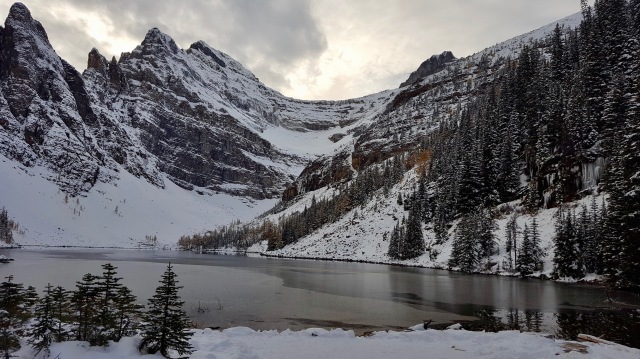 After Lake Agnes, we started hiking around and up to Big Beehive Lookout. 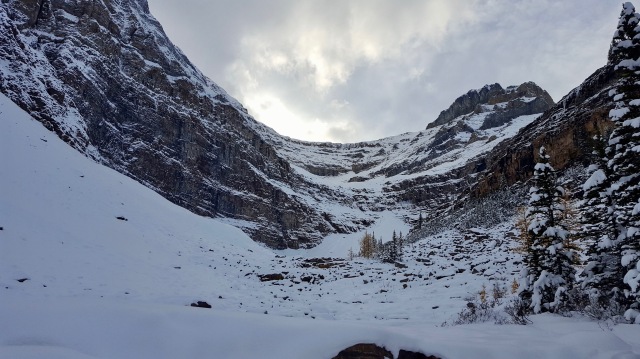 On the other side of Lake Agnes, that is the Tea House you can see across the lake.

We just loved the Larches! 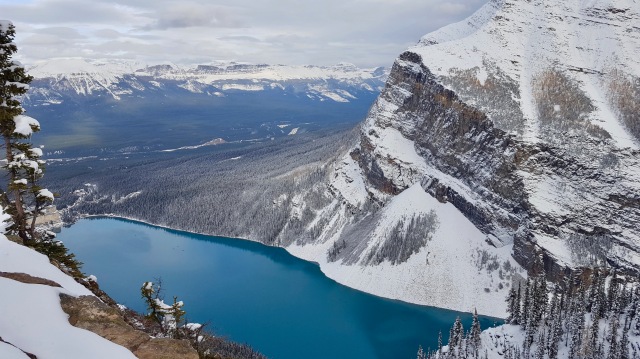 From the top of Big Beehive looking down over Lake Louise. 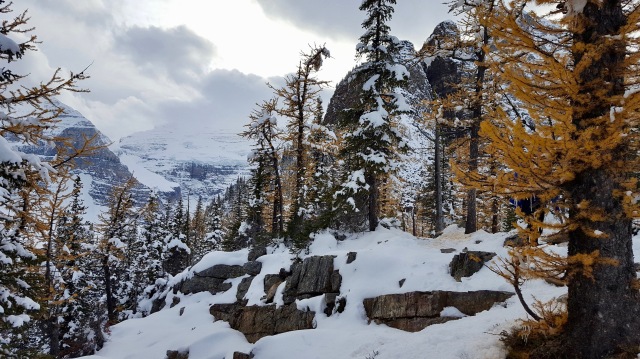 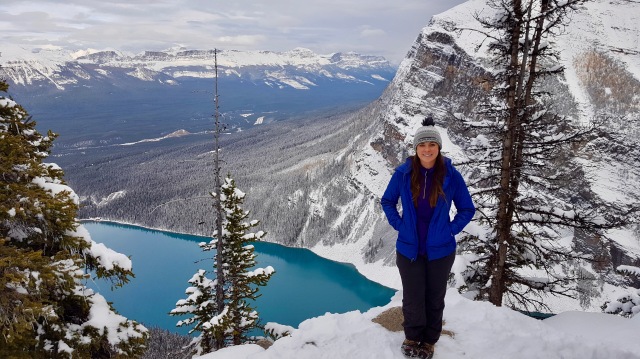 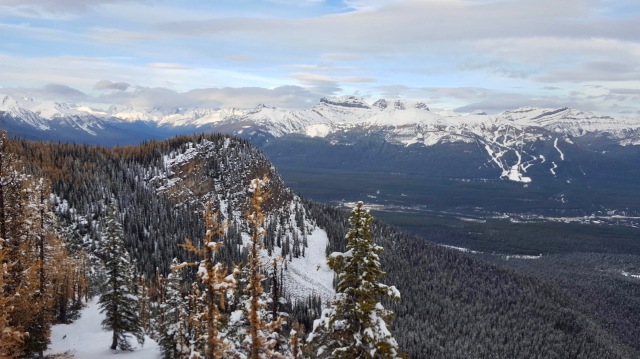 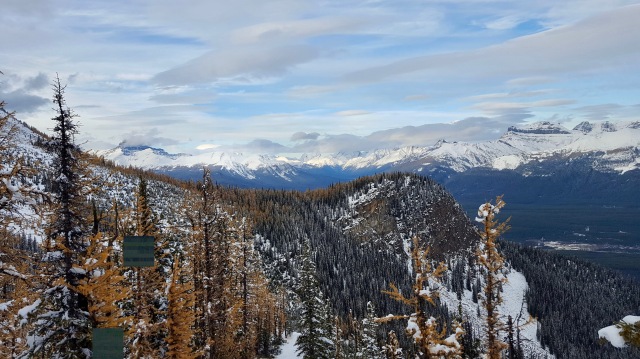 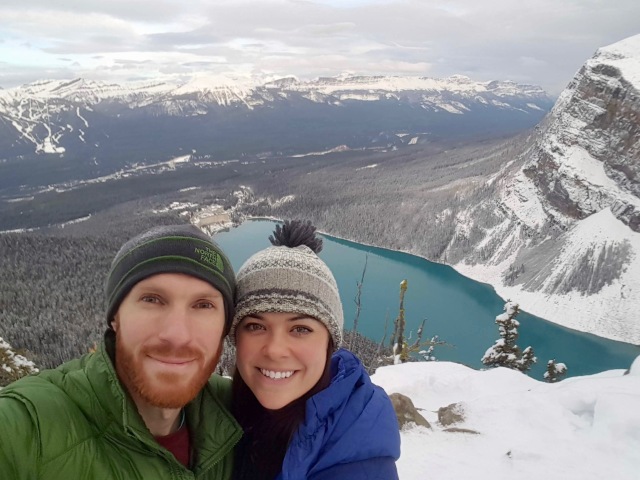 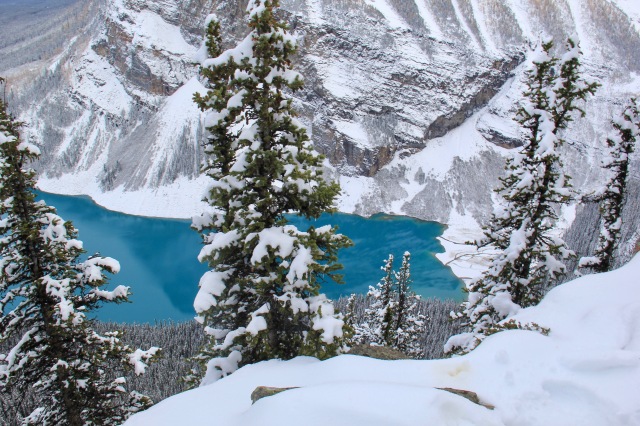 The water was crazy blue from all the Glacier melt. 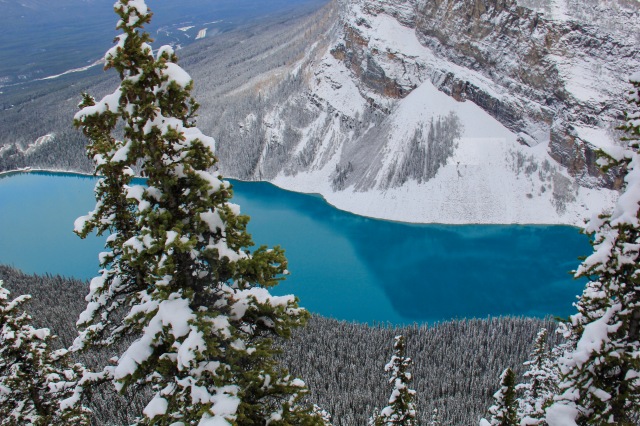 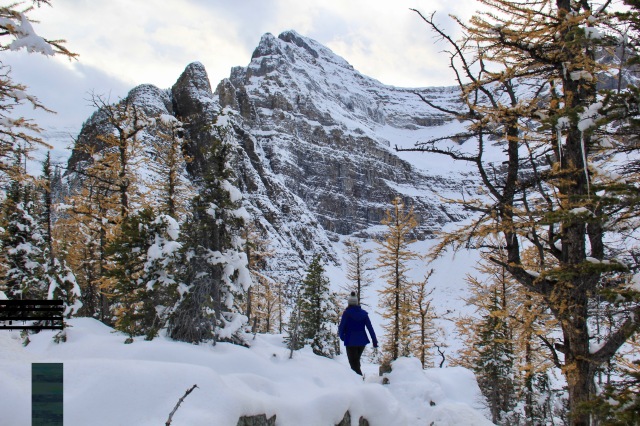 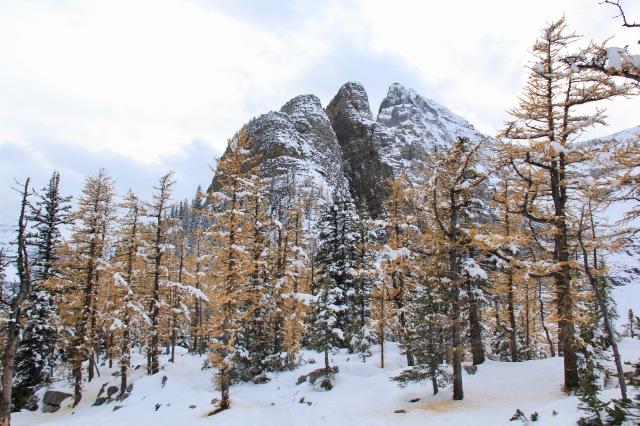 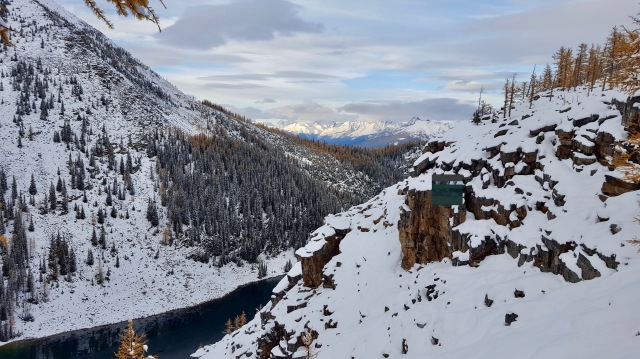 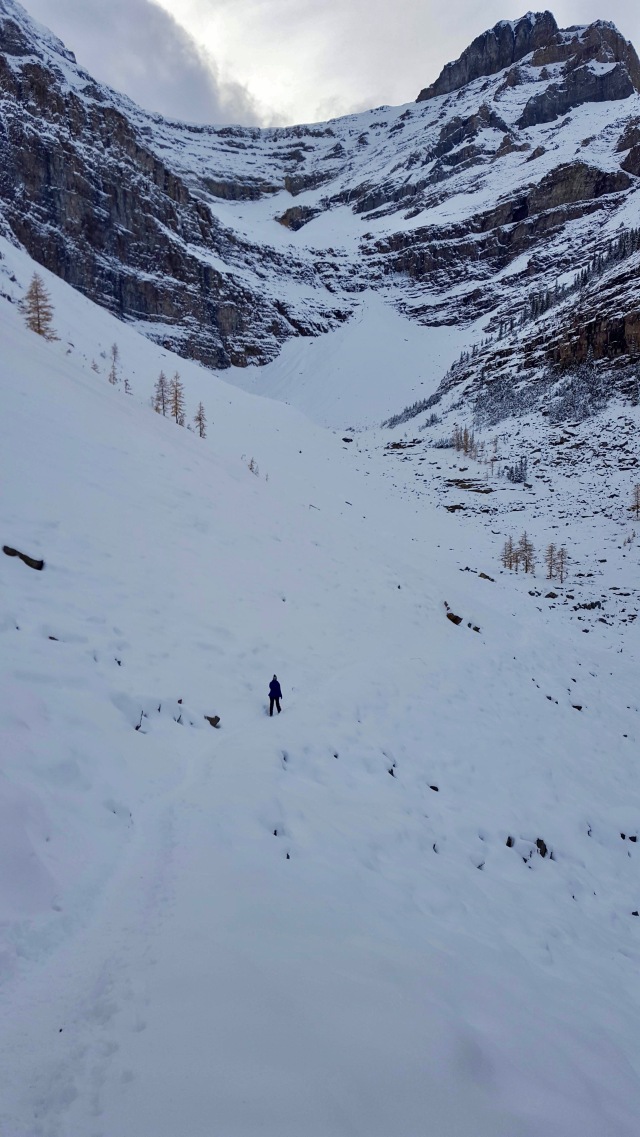 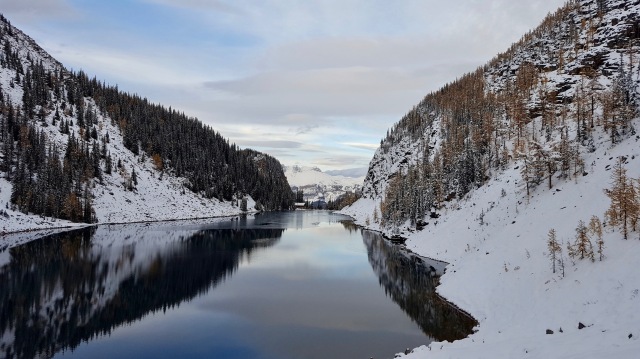 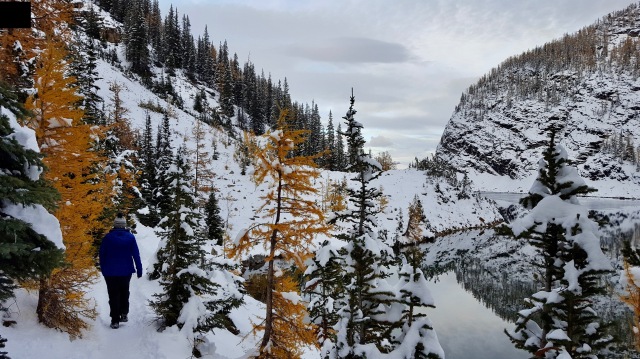 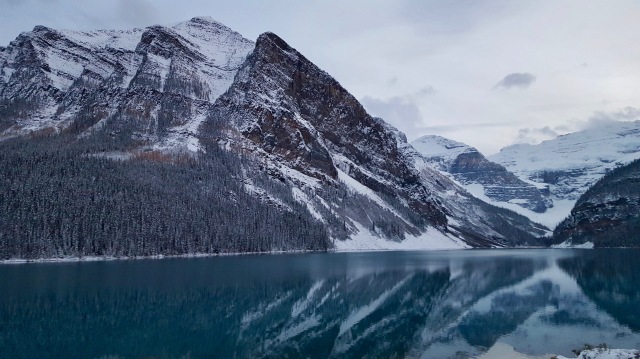 Back to Lake Louise for dusk and this beautiful reflection after the sunset.

The end of this day marked 590 miles since marriage.

What a great first day!

Below is a video of Phil skipping rocks on frozen Lake Agnes.

We had no idea it would make this really cool sound!

Can you hear it? Also, it made this sound when the wind blew over the ice. How cool! 🙂